The Asia-Pacific Triangle was a geographic zone designated in the Immigration and Nationality Act of 1952. Also known as the McCarran-Walter Act, the act attempted a synthesis and overhaul of American immigration and naturalization policies and procedures in the midst of early Cold War tensions. World War Two and its aftermath had already seen changes in U.S. exclusion of Asian immigration. The Magnuson Act of 1943 reversed the terms of Chinese exclusion and the Luce-Cellar Act of 1946 exempted Indians from the restrictions of the Asiatic “Barred Zone,” although their actions were still largely symbolic because immigration from China, Indian, and the Filipinos were still held to the one-hundred person annual allotment of the national origins quota system. The acts, nevertheless, also allowed Chinese, Indian, and Filipino immigrants in the United States to file for naturalized citizenship.

The McCarran-Walter act extended these changes generally, allowing all immigrants the right to naturalize and lifting the barred zone’s exclusions from the remaining areas where they still applied – areas whose political boundaries and status were rapidly changing and contested in the context of post-war decolonization. As with the Magnuson and Luce-Cellar Acts, exclusion was removed, but significant quota restrictions, which had been further enumerated including the addition of blood quantum criterion in the Nationality Act of 1940, remained. The Asia-Pacific Triangle was the McCarran-Walter Act’s modification of the Barred Zone’s original geographic logic to these accommodations. The Triangle was similarly delineated using geographic lines of latitude and longitude, expanding the original zone and shifting it slightly to the east. It covered “areas situate wholly east of the meridian sixty degrees east of Greenwich, wholly west of the meridian one hundred and sixty-five degrees west, and wholly north of the parallel twenty-five degrees south latitude.” Defined  to avoid direct mention of race or nationality, the Triangle’s purpose was still racial and national. People whose ancestry, including those whose ancestry was as much as half, were deemed indigenous to nations within it counted against those nations’ quotas – almost all set to one-hundred given the national origins systems’ two-tiered racial accounting – regardless where they were actually immigrating from. 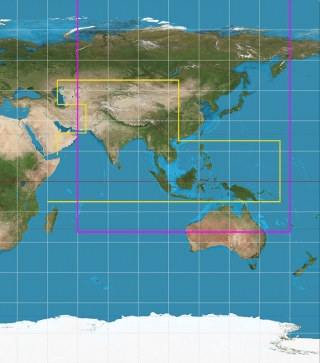 Although the Triangle is a rectangle on the map, that geometry is an artifactual product of the map’s projection of the earth’s surface onto its flat, two-dimensional space. I used an equirectangular projection, which shows latitude and longitude as a lattice of equal lines, to draw the two zones’ borders more easily. Drawn on the surface of the Earth – or technically, an ellipsoidal approximation of the geoid, the mathematical representation of the Earth’s actual, irregular “surface” – the east and west borders of the  converge, meeting at the north pole. In other words, the borders of the Asia-Pacific Triangle form a triangle, but it is a non-Euclidean triangle!

Here is an illustration from Wikipedia showing a spherical triangle to help visualize the Asian-Pacific Triangle. 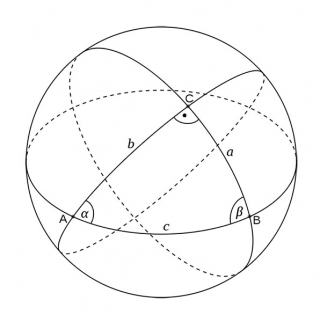 Its perspective looks down upon the intersection, C, of two great circles, a and b, on the surface of a sphere. For the Asia-Pacific Triangle, that point corresponds to the geographic north pole – which is distinct from the Earth’s magnetic north pole. The arc segments, C-A and C-B, of a and b similarly correspond to its east and west longitudinal borders while the arc segment, A-B, of the circle, c, that meets them to form the base of the triangle corresponds to  its southern border. The actual Asia-Pacific Triangle, however, was larger on the surface of the Earth, significantly, than this example spherical triangle.

Aside from its historical and legal significance, I would love to have been present for the House and Senate debates about the this provision of the McCarran-Walter Act and wonder who presented the idea and how they might have responded to questions about the Triangle’s geometry! Thankfully, the Asia-Pacific Triangle only existed for thirteen years, disappearing in the 1965 Immigration and Nationality Act (the Hart-Celler Act) which replaced the national origins quota system with one based on uniform national quotas within hemispheric allotments.