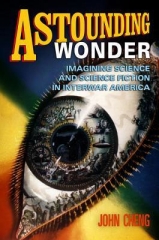 My first book, Astounding Wonder: Imagining Science and Science Fiction in Interwar America (University of Pennsylvania Press, March 2012), examined science fiction in the 1920s and 30s to consider the intersection of popular culture, science, and technology in what might be called popular science. Science fiction first appeared and circulated within the “pulps,” a cheap-paper magazine industry that flourished in the late 19th and early 20th centuries. Relying on direct sales rather than advertising, after World War I their publishers marketed and sold titles based on the genre of their fiction, creating and naming “science fiction” in the process. The pulps invited readers not only to read, but also to participate in science fiction. The ideas they circulated between readers, writers, and editors fostered both a sense of mutual community and of wonder about and investment in the potential of science. Underlying this sensibility was a concern about the place of ordinary individuals within modern science and society. Readers’ letters spoke to the issue generally while figures and tropes that emerged within the genre in the 1920s and 30s – notably verifiable facts, mechanical robots, Asian aliens, and time travel to the future – gave it specific form with regard to contemporary issues about gender, class, race, nation, and progress. Readers’ activities, organizing clubs, producing their own fan magazines, and forming rocket societies, similarly addressed the same concerns outside the pulps. Their active industry revealed the tension within modern science and popular science. Even as it inspired readers’ imagination and activities, science fiction’s participatory ethos sparked debates about amateurs and professionals that divided the worlds of science and science fiction in the 1930s and after. These tensions reverberate today: in a society where everyone lives science’s consequence, who is able and authorized to speak about it?