The image I use in the banner for this site is a digital composite that tries to express some of the Planet Mongo Project’s (TPMP) themes, sentiments, and contradictions.

The ringed planet and smaller companion rising over the hills of the image’s foreground is adapted from a NASA image of Saturn and one of its moons rising, from the perspective and horizon of another of Saturn’s moons. Their planetary rising express the scene’s, and the site’s, in science fiction. The apparently natural vista of the vividly visible rising and the dissonant recognition that its perspective is one not visible from Earth combine to note the image’s imagined and imaginary nature.

The less vivid foreground, and in the banner image, background sky, are equally significant for the site’s concerns. They are adapted from an Ansel Adams photograph of the Manzanar “war relocation center,” one of ten internment camps built during World War Two to house Japanese Americans who had been rounded up and forcibly removed from their homes in the Pacific coast states and indefinitely detained by the United States government. The Adams photograph is part of a series he took at Manzanar in 1943 and 1944. They formed the basis of a 1944 book, Born Free and Equal, arguing against the internment. Adams donated the collection of photographs to the Library of Congress in 1965.

This specific photograph was taken at a distance, showing the landscape of the dry Owens Valley plain where the camp was situated and the hills surrounding the valley. Towering over this landscape were dust storms that not only enveloped the camp, which is barely visible at the base of the image, but shaped the sky itself above. The photograph’s scale argued nature’s primordial capacity, that the camp, as well as the people within it, was the subject of immense forces beyond their control, to be weathered, not challenged. 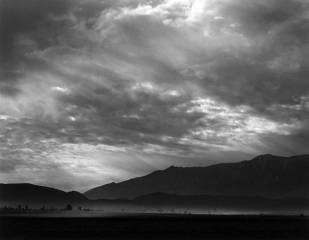 History, however, and the experiences of the people forced to live in the camps, which most of Adams’s other photographs documented in their daily activity, demonstrated that this grand-scale vista, of nature’s apparent power, did not determine the circumstances of the landscape it revealed nor did it decide the destiny of those too small to be visible within it.

Finding those perspectives, of social history’s collective and contingent individual action, and bringing them to bear on powerfully and apparently determined vistas is one of the aims of the Planet Mongo Project. It seemed appropriate, then, to combine science fiction’s imagined and different perspective with Adams’s photograph, not only for its powerful imagery, but the way that Asian American history informs what one makes of it.

Here is the full composite image of the original: 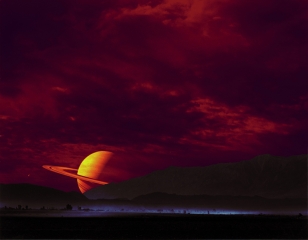 I updated the image slightly, making the ringed planet slightly smaller and rotating it so the angle of its rings is more vertical than horizontal. I also adjusted the contrast and color of the background clouds and added the text from the banner. Here is the revised image (January 2012): 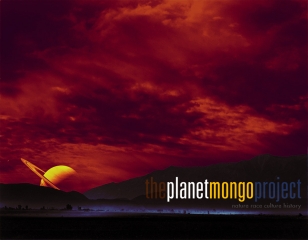 These web sites offer more information about the camps and other examples of Adams’s and other 1930s and 40s photographers’ images of them.

This site uses Akismet to reduce spam. Learn how your comment data is processed.