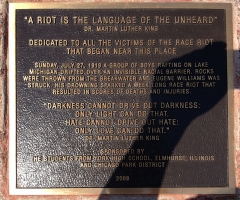 At the end of last summer, the fences surrounding the construction zone were removed and this summer, when I took my first ride after winter’s forced hiatus, the area they enclosed had become a stretch of new, mixed-used public lands: a section where the original wild growth prairie was being restored and allowed to return to the shoreline, a sand beach, a harbor for boats and other water vehicles, and a recreation area combining a children’s playground and several covered picnic tables, which sit on a rise overlooking the harbor and offering a vista view of the beach.

At the north end of this stretch, the original commemorative rock and plaque remained, but their surroundings had been changed as well. On each side of the rock was a fallen tree; the trunk of one lay across the ground running away from the rock, the trunk and bare branches of the other sprawled similarly in the opposite direction. At first glance, they appeared to be tossed remnants of a passed storm, but the rock in their midst suggested another explanation for the trees’ fallen state: the two were originally one, their pieces sundered and split by the force of the rock’s arrival and fallen in separate, but equal directions. 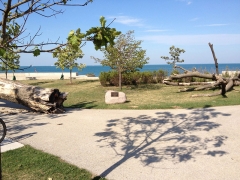 The rock, the plaque, and the trees were settled on a grassy triangle set apart from and between two paths, one along the edge of the new recreational area’s parking lot and the other along a low concrete windbreak on that met the lake’s waters just north of where they opened into the sands of the new beach. A few feet behind the rock, a sapling tree had been planted and behind it, a row of bushes. Behind that row, a section of the windbreak was removed, allowing an unobstructed view of the lake out to the horizon. The setting’s additional elements suggested a broader perspective from which the rock and fallen trees could also be seen. In its unified scene, the root of past division was also the source for growth in the present and into the future.

Elements of the scene extended south toward the newly developed areas. Parts of fallen trees lay on the grass from the commemorative rock and plaque to the brick building on the north end of the harbor that houses the beach lifeguard station, bathrooms, water fountains and a hotdog and concessions vendor. Past the building, in the playground leading toward the picnic area, tree figures transform, instead of lying on the ground, their trunks are planted upright and painted in bright primary colors: red, blue, and yellow that stand out in contrast to the colors of the flowers, scrubs and other greenery of the more conventional landscaping. This larger scene shouts color riotously while proclaiming the inclusivity of its broad spectrum. An obvious symbolic suggestion is the vibrancy of multi-culturalism, which extends socially to suggest that the playground and the picnic area are open to all comers.

As a historian, I am familiar with the circumstances of the 1919 race riot. On a hot July day, a white man on the beach threw rocks at a group of African American youth, who swimming with a make-shift raft had wandered across the line separated the segregated beach. One rock struck the head of one of the boys who drowned. Calls for the man’s arrest, which were resisted by a white police officer, attracted large crowds on both sides of the issue. Amid the growing tension, an African American man fired upon a group of police officers and in the return fire, an African American police officer shot and killed him. The gunfire sparked further violence on the beach that, with people fleeing the scene, extended into the city, spiraling out of control into several days of violence and terror that killed dozens, injured hundreds, and burned and damaged homes and businesses across entire neighborhoods.

Neither the commemorative rock and plaque nor the newly developed broader scene provide an account of those horrific events. At first, this offended my historical sensibility. But upon reflection I reconsidered my offense. Is the point of commemoration reconstruction or recreation of past events? Or to remember them in order to do justice to them? Particularly in the case of horrific events such as race riots, what constitutes proper or adequate justice?

I still think, particularly because the new development’s design demonstrates an awareness of the riot if not its significance, the site should include a way for visitors to learn about the riot, its context, and significance. But at the same time, on my bike rides I saw first-hand the transition from long-established public recreation areas on Chicago’s north side to far less developed areas on its south side, a difference that was a historical consequence if not a product of the 1919 race riot. In that sense, the new availability of similar public areas on the south side represents a different form of historical justice. Large numbers of African Americans are taking advantage of the new area’s easier access to where they live to make ample use of them, barbequing, chatting, and swapping stories, frolicking in the water and on the beach. If they are not aware of the area’s commemorative rock and plaque and history, visitors, African American and otherwise, also do not seem to be concerned that rocks might be thrown at them as they swim.

[Note: Having spent the latter part of the summer relocating to Pennsylvania from Illinois and adjusting to my new location and job, I neglected to post entries I wrote during and since moving. I’m now posting them, but back dating them to reflect when they were actually written.]